If to you the thought of eating low-fat poultry meat is bland and boring, try this out - your taste buds will be in for a treat!

This marinade recipe is based on a Portuguese specialty called “piri-piri” chicken, utilizing ground native piri-piri peppers (originally from Africa but now the pride of Portugal) rather than cayenne or other ground peppers. Not sure if piri-piri is available here in North America in grocery or specialty stores but if you can find it, try it out – it adds a nice flavour.

The marinade is absolutely marvelous for BBQ chicken pieces, but I imagine it would taste equally yummy on other grilled or baked meats or seafood (I've done it with shrimp and it was fantastic! Will have to try it on scallops).
1 cup EVOO
1.5 TBS piri-piri pepper or cayenne pepper or ground chili pequin / Thai chilies
.5 TBS paprika
4-5 cloves minced garlic
2 tsp sea salt
.5 tsp ground oregano
2 tsp lemon juice
.5 tsp ground pepper
.5 tsp sugar

Put the above in a tightly sealed jar, shake briskly, and keep in the fridge for a few weeks to meld flavours. Take out every day or two for a couple of hours to un-congeal (is that a word?) the oil, so you can shake and mix the ingredients more.

Recipe based on 1 cup of oil should cover 25-30 pieces of chicken. I usually use only 1/4 cup at a time, for 6-8 pieces of chicken. 8 hours is enough to blend the flavors in the jar, but the longer the better. Marinate the chicken or other meat in the fridge at least 8 hours or longer for the most intense flavour. 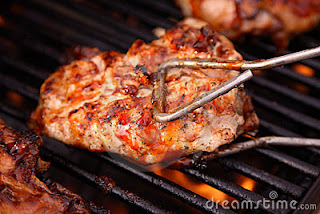 Be sure to remove the extra fat and skin from the chicken pieces before marinating or the grill could flare up and burn the chicken.

Grill on medium-high heat for about 45 minutes (based on thick breasts or thighs) or until juices run clear.

For chicken Tandoori, you may add 1 TBS Turmeric, 1 tsp. gharam marsala, a small amount of red food coloring (optional), and increase the lemon juice to 1 TBS. Turmeric is full of cancer-fighting anti-oxidants.

I haven't tried it yet, but might some time add tequila and use lime juice to make tequila-lime chicken; or some bourbon and brown sugar to make bourbon chicken.
You could also try this oven-baked, with the chicken pieces coated with seasoned bread crumbs after dipping in milk, for a “Fried” chicken that would make the Colonel come back to life.
Feel free to modify as you wish.
Bom apetite!
Posted by Chris Webb at 11:20 AM