“Why use up the forests which were centuries in the making and the mines which required ages to lay down, if we can get the equivalent of forest and mineral products in the annual growth of the hemp fields?” – Henry Ford

The production of industrial hemp in the U.S. has been virtually illegal since 1937, mostly due to political reasons. That's a major bummer, because hemp has many uses that are much more environmentally friendly than common products we currently use: 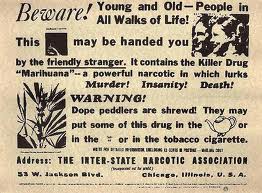 Hemp as an alternative fuel source to petroleum: Hemp seed oil can be used in bio-diesel engines. Henry Ford intended the Model T to run on bio-diesel, specifically hemp. Hemp is more easily turned into bio-diesel than peanut and soybean oils, the original diesels. Unfortunately, Big Oil entrepreneurs, who were making it rich searching for and manufacturing petroleum oils, made up fallacies about hemp that eventually led to the passage of the Marijuana Tax Act, that made growing of hemp and all cannabis virtually illegal in the U.S., even though the production of hemp bio-diesel could lead to reduced dependence on fossil fuel, less war, corruption, and pollution over oil. Hemp as a bio-diesel is a totally renewable resource.

Hemp as an alternative to cotton: Unlike cotton, hemp does not require large doses of pesticides and herbicides, as it is naturally resistant to pests and grows fast, crowding out weeds. Hemp fabric is more durable, mildew resistant, and blocks out more UV rays. 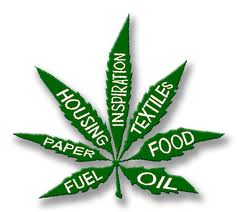 Hemp as paper: To make paper, trees must grow for many years, while a field of hemp can be harvested in a few months and make four times the paper over a few decades. Also, the making paper from hemp uses only a fraction of the chemicals required to turn trees into paper. The Declaration of Independence was written on hemp paper. George Washington and Thomas Jefferson both farmed it. Ben Franklin owned a hemp paper mill.

Hemp as an alternative to plastic. Biodegradable and recyclable plastic blends address global policies for CO2 reduction and oil dependence. Hemp is also used in many other products, such as toothpaste, lubricants, inks, paints, cosmetics, cleaners, and even concrete.

Hemp as rope and canvas: All ship's ropes and sails were previously made from hemp fibers. In fact the word canvas comes from cannabis. It wouldn't surprise me if Jesus Christ walked the earth in sandals made from hemp.

Hemp as a super-food: Hemp seeds contain all the essential amino acids and essential fatty acids necessary to maintain healthy human life. The seeds can be eaten raw, ground up and added to breakfast cereal, sprouted, made into hemp milk , tea, or used in baking. Fresh leaves can be a tasty salad additive. Products include cereals, waffles, hemp tofu, and  butters. Retail hemp food products have virtually zero THC, so there's no worry about getting high off it! 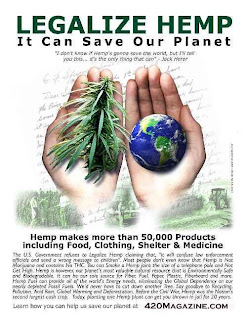 Don't forget about the obvious: Hemp (well, "marijuana", actually) as an alternative to many chemical-based, animal-tested, Earth un-friendly pharmaceuticals. Uses range from well-documented reduction of nausea and vomiting, stimulation of hunger in chemotherapy and AIDS patients, lowered intra-ocular eye pressure (shown to be effective for treating glaucoma), as well as general analgesic effects (pain reliever) Some studies have also shown that cannabis-based drugs can reduce or prevent certain types of cancers. Many U.S. States have made, or are considering making, cannabis sativa legal for medical purposes. Shhhhh, don't tell Pfizer or Monsanto... they'd want to patent it.

So in honor of upcoming Earth Month in April, write your favorite U.S. legislator and ask that they ignore their fat-cat lobbyists, and recognize the potential value of ending hemp prohibition, for the environment and as a tax revenue-generating industry.

The Trash Walker of Stetson Valley

Today while walking near home in the adjacent subdivision of Stetson Valley, I met an intriguing older man ambling along the sidewalk with two bags of trash, in an area where you wouldn't normally see transient people. With beads of perspiration welling up on his sun-reddened face, he answered my queries about what he was doing. Walking side-by-side, as he picks up some loose debris off the road, he tells me that he walks four to five hours around the neighborhood every morning, partly with his wife, Chris. He figures that since he's already out walking anyway, he might as well be picking up litter while he's at it. He usually starts around 7:00 am, before the sun gets too hot, but got a late start today. He often gets four or five bags full after walking for this long, but today has been a low-litter day. He's been doing this every day since he moved into his Stetson Valley home in 2006. The reason why he does it? To keep the neighborhood looking clean. And it does. I thanked him for doing such a noble thing for the environment and his neighbors, and he went on his way, occasionally bending over to pick up a stray candy wrapper or squished water bottle.
Posted by Chris Webb at 4:27 PM 1 comment: