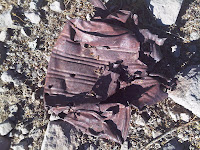 Last winter, the City of Phoenix opened a new park in Stetson Valley, a Phoenix subdivision adjacent to our own. I was not impressed - it seemed that all that the park included was several soccer fields and a small children's play area. What a shame that the dozens of acres that the city had set aside for public recreation was left undeveloped. Land that for decades has primarily been used and abused by hunters, target practice shooters, ATV'ers, illegal dumpers, and partiers, all of whom have left a devastating amount of debris and destruction upon what was once pristine Sonoran Desert. I was disappointed - if it were cleaned up a bit, this area in the Deem Hills would be a prime location for some excellent hiking trails. 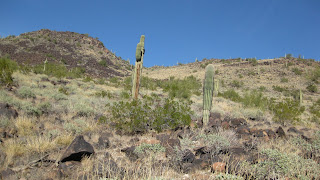 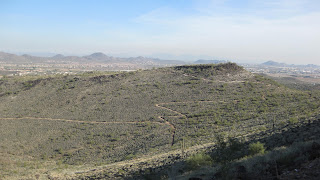 Later in the year, sometime in the fall, I noticed that there appeared to be a trail parallel to Happy Valley Road cut into the hill behind the Stetson Hills subdivision. My wish must have come true! I went to the Deem Hills Recreation area and now found that the city had indeed built some new trails over the summer. My maiden hike in late November, with my husband and visiting mother, found us plodding happily along several miles of new, well-graded trails. 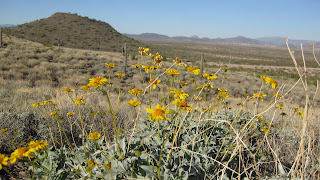 Since then, my husband and I have found a new favorite in the Ridgeline Trail, which runs off from a trail that circumferences the highest hill, zigzagging its way up to the top, then switchbacks back down to the main trail. The views are amazing. From the ridge, you can see pretty much the entire Valley of the Sun and its surrounding mountain ranges - the Bradshaws, White Tanks, South Mountain, Estrellas, McDowells - even Weaver's Needle in the Superstitions! You can also see glimpses of Lake Pleasant, the reflection of windows on hillside mansions in Carefree, Piestewa Peak, Shaw Butte, the hills of Thunderbird Park, and up-close-and-personal views of Ludden Mountain and Pyramid Peak. 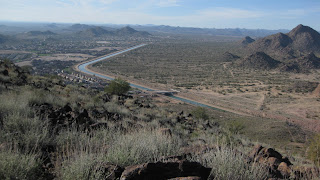 Miles of the CAP canal are seen from here. I can even pick out my own house from the middle of one of the hundreds of subdivisions visible from this point. Hot air balloons make a regular appearance, seeming to almost graze the hill to give their passengers a thrill. We often sit atop the hill close to dusk watching them go by, land in the close by desert, and take off again. 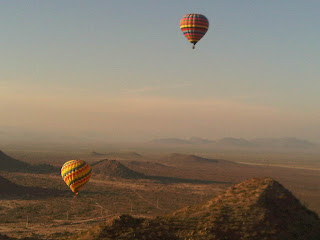 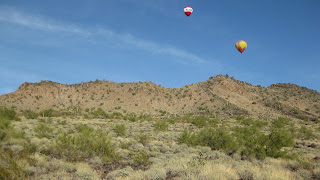 We've now hiked this trail at least a dozen times this winter.  The ~4 mile trail connects to a community trail that flanks Stetson Valley along the canal, all the way to a block away from my house, making a perfect 7 mile hike from my doorstep. I'm thrilled that the City of Phoenix has answered my wish for a trail system so close to home!


Below is a map of the Deem Hills Recreation Area trail system. The trails are still being improved, but are already a favorite among hikers, wanderers, horseback riders, and mountain bikers. 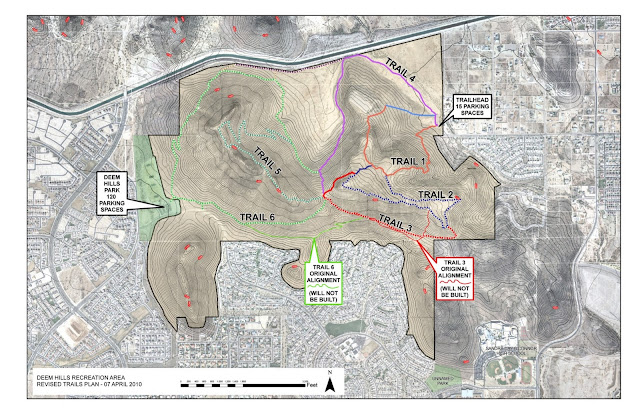 Posted by Chris Webb at 1:33 PM No comments: