Smile in the Sky 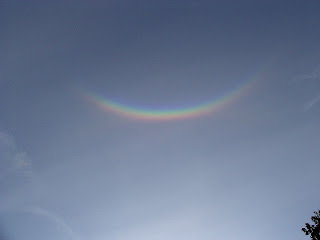 Yesterday around 5:00 pm, as Jason and I were chillaxin' in the pool, we were treated to a rare sight in the hazy Phoenix sky - an upside-down rainbow. Never in my *mumble* years on earth have I seen such a thing.

No, our eyes weren't playing tricks on us, and we hadn't had four-too-many frosty beverages. Apparently, this was an optical phenomenon that happens when atmospheric pressure, the angle of the sun, and the ice crystals in cirrus clouds have a party.

According to Wikipedia.com (from where I copied this photo), "It is rarely noticed because it occurs so far overhead, but in fact is relatively common. Cirrus clouds which cause a sun dog can cause a circumzenithal arc when they reach the zenith, if the Sun is low in the sky."

True, I probably wouldn't have noticed the arc, had I not been wearing polarized sunglasses. It wasn't nearly as bright, colorful, or perfect when they were taken off. The Technicolor arch faded in and out for about an hour, sometimes showing only two colors, sometimes more brilliant than a regular rainbow.

Yet another spectacular masterpiece by the world's greatest artist, Mother Nature!
Posted by Chris Webb at 4:25 PM